For English please scroll down: 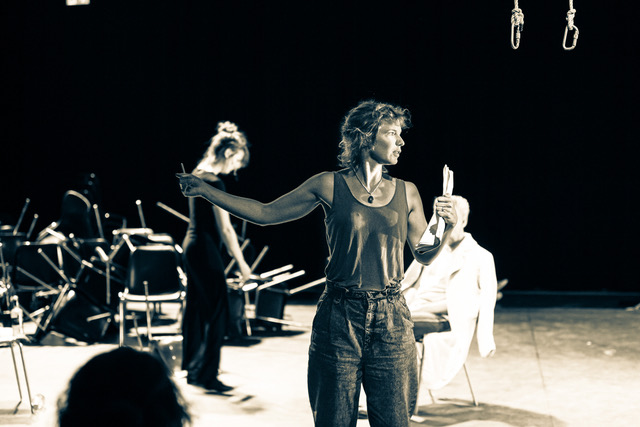 In her work, director Liliane Brakema juxtaposes a strong visual/dance language with an (existing) text. Since her studies she is a director for the Noord Nederlands Toneel/Club Guy&Roni in Groningen. Here she made several pieces where combinations of dance and acting were used. Recently, she successfully created, her first performance for the main stage, Tsjechov’s Uncle Wanya. In this creation, slowly, the roof collapses and the actors attempt – despite of everything – to play the piece Uncle Wanya. Even when the rain starts pouring down the roof, they keep on playing, referring to the corona reality in which the piece premiered and the climate crisis related to this. The performance was a great success for audience and press, however, due to the current corona situation she, in cooperation with a small film crew, translated her ideas into cinematography and created Uncle Wanya, the movie.
Besides her work for the Noord Nederlands Toneel she founded her own theatre group &Brakema productions (formerly: Firma Ducks) with which she made her first touring production Face to Face (2017). At the same time, she directed for bigger houses and created for example August Strindberg’s The Dance of Death at Theater Freiburg (2017) and Menuet at NTGent based on the novel by Louis Paul Boon (in 2018). And made Leonce and Lena her first production at Schauspielhaus Bochum (2019), Agatha van Marguerite Duras at Matzer (2020) and will create Nacht In at the Zuidelijk Toneel (2021).
Before Liliane Brakema (1987) went into theatre, she first finished her (cum laude) bachelor of ‘Economics and Business’ at the University of Amsterdam and graduated with the book called ‘Micofinance: for profit or poverty reduction’ in 2009. In 2015 she graduated from the Amsterdam Theatre School, with the performances ‘Gif’ from Lot Vekemans and ‘The Wild Duck’ from Hendrik Ibsen. Both immediately garnered attention: and the latter was chosen as one of the ten best performances of the season by the official jury of the Dutch National Theatre Festival. She also won the André Veltkampprijs for it.
Quite soon after her studies she was awarded with the Three Package Deal, a scholarship of 22,500 euros meant for toptalent from Amsterdam to develop themselves for a period of one full year. During this time she got the chance to develop her style, follow lessons at the Mimeschool of Amsterdam and went as an intern to assist Luk Perceval, Johan Simons, Guy Weizman and Ivo van Hove.
For each performance, and in close collaboration with her team, Brakema tries to create a new, slightly formal reality on stage. A reality in which she combines a text with a sensitive acting method and a strong physical language. For her, theatre is the place where the spectator is given time to experience and explore what’s underneath the daily routine of everyone’s life and the current situation in the world. When she looks at people, she keeps asking herself: What’s un- derneath? And what is underneath there? And then…? And then..?

Brakema gets her inspiration from the world around her. She visited Israel and Palestine in order to make a performance about the conflict, followed a year of drama school in Sydney at ACTT in Australia and travelled around the world to broaden her vision and question the society to which she is used to.